The Drakensberg found in eastern portion of the Great Escarpment, along the border region of South Africa and Lesotho, The Drakensberg, meaning "Dragon Mountains," (Afrikaans: Drakensberge - Sotho: Maluti - Zulu: uKhahlamba )

''The Drakensberg is the name given to the eastern portion of the Great Escarpment, which encloses the central Southern African plateau. The Great Escarpment reaches its greatest elevation – 2,000 to 3,482 metres (6,562 to 11,424 feet) within the border region of South Africa and Lesotho.'' as said from (Wikipedia/2020)

Image from ''Wikipedia'' The Drakensburg Mountains as shown in red 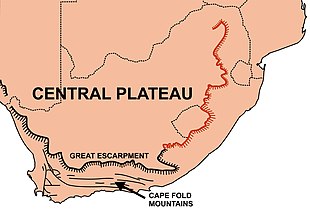 The area is home to a rich history both historically and geographically and stretches far and wide. Such as cave paintings by the San in the range of 35,000 to 45,000 rock art by the San as well as its highest peak being Thabana Ntlenyana, at 3,482 m (11,424 ft).

Member since 2 years ago
View Profile